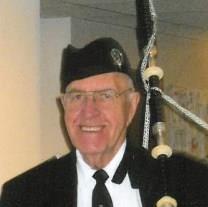 On August 9, 2016, at the age of 88 years, George died peacefully at Cottonwoods Care Home, in Kelowna, BC. He is survived by his loving wife of 62 years, Eileen; sons Ian and Dale; and 5 grandchildren.

George was born and raised in Regina, SK, where he married and raised a family. George had a long and distinguished career at the Regina Leader-Post, before settling in Kelowna, for a well-deserved retirement.

George was a member of many business and community groups: the Masonic Lodge, Shriners, sons of Scotland, the Better Business Bureau, and more, but he will best be remembered for his love and passion, the bagpipes. George was a pipe-major, band member, teacher, and mentor to others in the art of piping. For many years George was pipe-major of the Regina 10th Field Regiment Pipe Band. The band had successful tours of the USA and Europe, and even had a record made. He later helped found the Regina Police Pipe Band, as well as being a member of the Shrine Band. He was also a member of the Kelowna Pipe Band. Any opportunity would have him bringing out the pipes, for everyone to hear.

George loved pipes, piping and bands, and was involved his whole life in pipe bands in Regina, and later Kelowna. He taught at the Regina Boys' Pipe Band (later Fraser Pipe Band) in Regina, taught many new pipers at the Regina Police Servioce Pipe Band in the early days, and he was responsible for organizing many civic functions with pipe bands and massed bands. More to come.