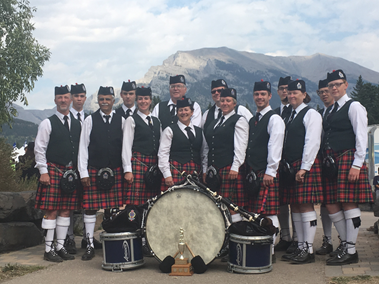 The Band performs at civic functions, multi-cultural festivals, and parades across southern Saskatchewan and in Regina as well as private events including weddings, funerals, birthdays, head tables, etc.  The band has also travelled to perform in several other Canadian provinces and American States.

The band includes 30 members and in recent years has participated in competitions in Saskatchewan, Alberta, and Manitoba and won several awards.  The band is proud to compete in Grade 4 and is the 2017 Saskatchewan Champions.

In addition to contributing locally, the band plans to attend several competitions in the 2019 – 2020 year as well as prepare and fund raise for a trip to Scotland within the next 2 years.
The band welcomes and teaches new members.  If you’re interested in learning to play the pipes or a drum, or already play, come check us out.