We have three sources of information about Neil Sutherland. The firsts is a biography from The Calgary Highlanders web site, followed by a letter and information from Neil's nephew Ward Falkner, anf the final clippings from the Regina Leader were sourced by Dr. Alex MacDonald, Campion College, University of Regina. 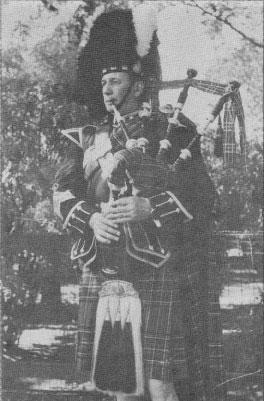 Neil Sutherland was born in Glasgow, Scotland in 1904 and learned piping from his father and Archie MacNeill, the uncle of Seamus MacNeill (famous founder of the College of Piping).  Neil served with the 139th Boys Brigade Pipe Band before the family emigrated to Winnipeg in 1914.  Sutherland instructed the 12th Signals Pipe Band, and served in the Queen's Own Cameron Highlanders of Canada for eight years before moving to Saskatchewan and joining the Regina Police.  He organized a Regina Boys Pipe Band and won awards at the Banff Games two years running. He was given permanent custody of the Beatty Trophy and asked to return to Banff as an adjudicator.

By the 1930s, Sutherland had accepted a position as the chief of police in Melfort, Saskatchewan.  That the Calgary Highlanders have always cultivated talent from unique sources is evidenced by the story of Alex Smart.  In his capacity as Chief of Police, Sutherland one day had to arrest a hobo - Smart - in a railyard.  Upon finding he was a piper, the hobo resided at the Chief's house instead of a jail cell.
When the Second World War started, Smart joined the Calgary Highlanders but Sutherland moved to Manitoba to serve with the Winnipeg Police.  When the Highlanders moved to Camp Shilo, in Manitoba, Smart persuaded Sutherland to come and visit, and in the end convinced Sutherland to join the band.

When the battalion left Shilo for overseas, Heather - a black Scots Terrier belonging to Sutherland - accompanied them, smuggled in the band's bass drum.  Heather didn't return from overseas - being left with a good family in the UK.  A set of Sutherland's bagpipes also did not return home; they were destroyed when a shell hit an ammunition truck in Normandy in which they were being carried.  By that time, Sutherland had been Pipe Major for two years, having taken over from Stoker in 1942.

Sutherland did very well on the courses he took while in the UK; Willie Ross, the Chief of Piping for the British Army in fact wanted Sutherland to stay in England after the war.  But Sutherland returned to the Winnipeg Police, where he was Pipe Major from 1945 to 1970.  He suffered a heart attack in 1972 and died of a stroke in 1973.

And the following letter from Neil Sutherland's nephew Ward Faulkner. We are also very grateful to Ward for the photos accompanying these articles. 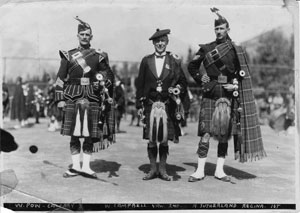 My very good friend Ron MacLeod forwarded your request for information on Saskatchewan pipers and bands.  My Uncle, Pipe Major Neil Sutherland of Winnipeg, Manitoba, was a resident of Saskatchewan during the late 1920's and early 1930's.  During that time he served with the Regina City Police, the Saskatchewan Provincial Police and was also Chief of Police, Melfort, Saskatchewan.  While living in Regina, Neil was one of the persons instrumental in the formation of the Regina Boy's Kiltie Band and the Regina Piobaireachd Society.  During his time in Melfort, he was active with the Melfort Pipe Band.  Neil left Saskatchewan during WWII when he enlisted with the Calgary Highlanders and served as P/M until the end of the war.  Upon his return home, he joined the Winnipeg Police force and served as P/M  City of Winnipeg Police Pipe Band for over twenty years.

During the late 1920's and while residing in Regina, Neil was recognized as one of Canada's premier pipers having won the Beatty trophy three consecutive years at the Banff Highland Gathering.  The Gathering was sponsored by Canadian Pacific who also provided financial support for the annual participation of a leading piping competitor from Scotland. Followingwins on three consecutive years, Neil was asked to withdraw from competition and to serve with P/M Willie Fergusson, of Clan MacRae Pipe Band, as a member of the judging panel.

I am attaching a 1932 newspaper clipping describing a trip taken by ". . .the newly formed Regina Boy's Kiltie Band. . ." to North Dakota.  P/M Neil Sutherland and others are mentioned in the text.  I am also attaching a photograph of the first (Neil Sutherland, Regina), second (W. Campbell, Vancouver), and third (W. Pow, Calgary) place competitors for the Beatty Trophy - taken at the Banff Highland Gathering.  I am uncertain which year this was taken.  I also have in my possession Neil's original hand written notation (manuscript book) of pipe tunes that he used during the late 20's and early 30's with some of his original compositions - no photocopiers then!  I'm attaching a sample of this manuscript book (it's too large for my scanner) - the tune is titled Col. Alexander Fraser's Welcome to Banff by N. Sutherland, Regina.

P/M Neil Sutherland was my mentor and piping instructor for many years while I attended the University of Manitoba.  On  January 1,1972, Neil suffered a near fatal heart attack while piping during the Winnipeg St. Andrews Society New Years Day Levee.  The resulting oxygen deprivation caused neurological damage and, although he had a reasonably good recovery, he could no longer finger his beloved practise chanter.  When we sat down to continue my piobaireachd lessons during his early recovery, he lamented sadly ". . . Ward, I can't even play a burl. . ."  I told him not to worry, and " . . . just sing the tune. . ."  Sing the tunes he did, and for the next year almost every Saturday afternoon was reserved for my piobaireachd lesson - with Neil singing and me playing on the practise chanter.  He died on January 5, 1973 - almost a year to the day following his earlier heart attack.  With his passing the family gave me his old original manuscript book and his  hard-bound copy of the Piobaireachd Society books.  The inside cover of the latter is autographed by many of the leading pipers of the day, including, J. S. Ramsay, Willie Ross, John Wilson, Wm. Fergusson, R.G. Hardie, e.t. al.

I am also attaching a copy of a Christmas card sent by Lt. Col. John McEwing.  The front of the card had a photograph of Neil piping, and the inside provided associated text. I have many fond memories of my times with Neil and thought some ofthis information might be of value to you.  I guess my point is that P/M Neil Sutherland of Winnipeg was also a Saskatchewan piper.

Please let me know if I may be of any assistance re your project.