Enclosed is a picture that may be of some interest. It was taken on Christmas Day 1944, and the piper is my father, A.(Andy) Mackintosh. He grew up on The Heights of Fodarty, Invernesshire, and went to school in Strathpeffer. He served in the merchant navy from 1937 to 1947 and some of his ships were the T.S.S. City of Edinburgh, S. S. Antonio and the Cordillera. He spent most of the war years travelling the North Atlantic, however based on the picture, must have been in some warmer climates part of the time, possibly near Montevideo. After emigrating to Canada in 1947 he played with the 10th Artillery, Regina, Saskatchewan and later the 2nd North Saskatchewan Regiment in Saskatoon. He took his piping lessons from PM. Alexander Ross, Willie’s brother. I remember him talking of Ross, MacLennan, Burgess and Reid.

[The above was from a letter written to and published in The Piping Times. It was written by Dave Mackintosh, a long-time piper from the Saskatoon area.] 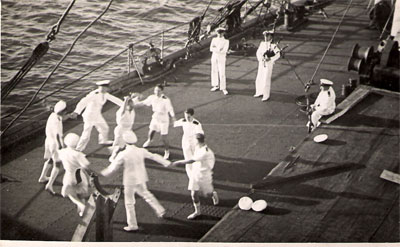 Click for larger image | Another photo of the same dance